This is part one of the series “Running a Spring Boot Application on Kubernetes Minikube in Windows.” This article assumes that the reader has previous experience with Spring Boot, containers, and Kubernetes. I will try and touch upon all of them in this post. After finishing this series, the reader will be able to:

2.   Create a Docker image for the application and store the image on Docker Hub

3.    Install minikube on your Windows Workstation and run the Spring Boot Docker image in it

You may also like: A Quick Guide to Microservices With Kubernetes, Spring Boot 2.0, and Docker

In the first part of this series, we will be creating a Spring Boot application and dockerizing it. We are assuming that the workstation to be used has Windows 10 or higher, at least 8 GB RAM and 100 GB hard disk. Let’s get started!

The following sections provide steps to create a Spring Boot app with RESTful services. Check it out.

An Introduction to Spring Boot

Spring Boot is Spring’s solution to the convention-over-configuration paradigm where we need rapid application development for production-grade, Spring-based applications. Spring Boot takes care of many configurations, thereby allowing the developer to focus mostly on the code.

Spring Boot provides an in-built Tomcat engine to run web applications inside the Spring Boot sandbox itself, instead of relying on third-party application server deployment for a developer workstation. It also provides the concept of parent dependency. If you add one parent dependency to your project build file, like build.gradle (Gradle projects) or pom.xml (Maven projects), Spring Boot takes care of adding the cache of dependant libraries for the parent.

To create a Spring Boot application, you must have Java 8+ installed and either the Maven or Gradle build tool. You must have one IDE installed as well.

For this project, I am using Java 8, Maven, and IntelliJ IDEA: Community Edition for my IDE.

In the artifact section and group section, enter the details as required. In the dependency section, choose the Spring dependency. And lastly, for the demo project, I choose Spring Web as it would be a RESTful web application 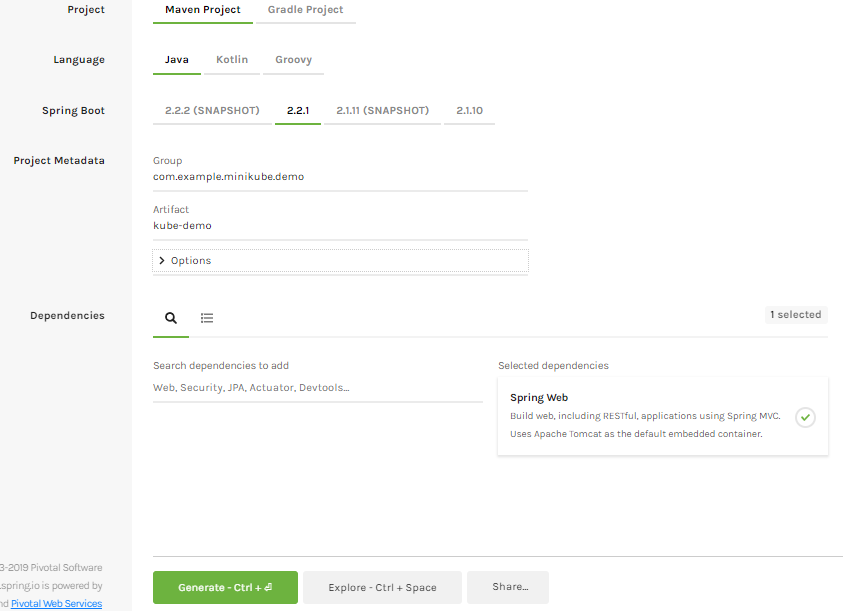 After adding dependencies, click on the “Generate -Ctrl +” button. Your project will be downloaded as a .zip file. Extract the .zip file in a workspace folder. You could extract it in C:\Users\[username]\workspace folder.  Next, start IntelliJ IDEA. IntelliJ may ask you to open a project. Choose your project root folder to open the project in the IDE.

The project will have a KubeDemoApplication.java, pom.xml, and mvnw.cmd file. The structure will look similar to the image below if you opened it in IntelliJ IDEA. 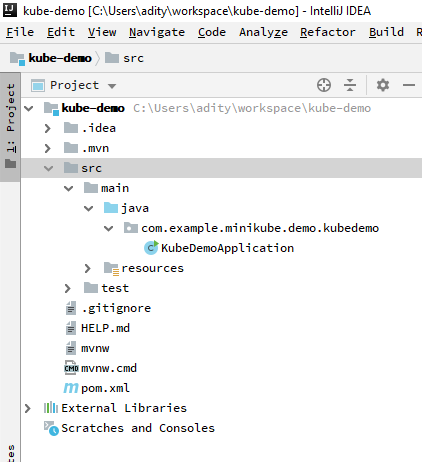 Now, we need to create a few more files to make it a web application.

Create one Kube.java file, as shown below, in the com.example.minikube.demo.kubedemo package.

Now, we would like to add one Spring REST Controller to support our CRUD RESTful operations. The filename will be KubeController.java.

Validation for the RESTful Application

Since we are done creating the REST service, we need to validate whether or not the service is working correctly. It involves starting the application and making a call to the RESTful services using the cURL or postman tool. cURL is a command-line tool that makes HTTP calls, whereas postman is a desktop tool used to test RESTful services. I will be using cURL for my tests.

The GET command for a list and GET for ID will be as follows:

the PUT command is used to update one object.

The DELETE command is used to delete a Kube object by id:

We need to make a GET call after the UPDATE and DELETE calls to validate whether both the commands worked fine.

Once we have validated that the application is working fine, we need to create a Docker image and publish it to Docker hub. Check out the following steps:

Docker is a Platform as a Service product that enables OS-level virtualization to run applications in isolated self-dependant sandboxes called containers. Now, the container is synonymous with Docker.

A Dockerfile is an input to Docker on how to create an image. We need to create a file inside our Spring Boot application root project and name it Dockerfile without any extension.

In the above file, the volume component must be changed according to the folder structure in your work station.

Now, it is time to create a Docker image. First, open the command prompt and make the Spring Boot project your current directory. Give the command “mvnw package” to create the minikube-demo-0.0.1-SNAPSHOT.jar under the target folder.

After that use the docker login command to log in to Docker Hub from the command prompt. Once the Docker login is successful, we need to create the image by giving the following command:

You need to put your correct docker user name and docker hub repository name. You could validate the image creation by using the docker images command. It will list all local Docker images present in your workstation. The output of the command is shown in the image in the section below.

Once the Docker image is available, you can start the Spring Boot application in a Docker container using the following command.

The output for the Docker image and Docker run is shown below:

The Docker image can be pushed to the Docker Hub repository with the following command:

Once it is pushed to the Docker Hub, you can verify it by logging into Docker Hub. Once it is available in Docker Hub, we can pull the image in any machine and run it.

Stay tuned for the second part of this series where we teach you how to run the image in a minikube environment on the Windows platform. We hope you enjoyed!

A Quick Guide to Microservices With Kubernetes, Spring Boot 2.0, and Docker

Build and Deploy a Spring Boot App on Minikube